The end of the semester has finally arrived and what a crazy past 14 weeks it has been. I have learned a lot of valuable elements in multimedia reporting. This class has been a lot of fun because I got to see everyone’s work in the class. I liked every week presenting our work to the class and getting feedback. I learned some things from other students that really helped me in the class and also in my TV 1 class. Sharing story ideas and ideas for technical elements really made the course a lot easier. As a part of learning, I now look back at all of these assignments and see some things that I really like, and some things that I could have done better and can improve on.

Prior to taking multimedia reporting one of the elements of this course that I knew I was going to be completely new with was using video to tell a story. Now after taking this course and doing our first assignment I have gotten   very comfortable with taking good quality video that is in focus and makes sense. My shots had a common theme and helped me develop a steady hand while also utilizing a tripod to have more steady shots.

Gateway at Idea Garden at UIUC

The photo essay was one of my favorite assignments in this course. In the beginning of the semester, and pretty much all of my adult life until this point I never thought of myself as a photographer. To an extent I am still not a photographer, but I am capable of taking good quality photos now. I went to the arboretum to take some amazing photos of the scenery and discovered how important it is to be very observant when taking photos of nature. I had a lot of fun taking these photos and uploading them to see which ones to use in this assignment. The thumbnail above, I think was one of the best photos that I captured there. You can view the rest of the photos from my photo essay here.

Another rewarding part of this class was not only using the camera for assignments, but testing your skills outside of class. As a member of the Marching Illini, I went to New York to perform in the 89th annual Macy’s Thanksgiving Parade. During our time in New York I took many photos with my Cannon camera and Samsung Galaxy S6 Edge which can be viewed here. (Must be logged into Facebook)

For Assignment 3, which was a video essay, I surprised myself. At first I did not know what to shoot. Part of journalism is figuring out a story and figuring it out fast to meet a deadline. I came up with this idea to do a cooking demonstration of one of my favorite meals. I never really thought of filming myself cook and getting wide medium and tight shots of the elements of cooking. I was very pleased with the shots that I got in the end because they were really clear and the natural sound really made you feel like you were in the room. For the record I do not consider myself a good cook, I will leave that to my brother who is finishing culinary school this semester. My full video essay can be viewed here.

Having taken audio journalism in the spring of 2015 I was not really worried about assignment 4 which was an audio package. It was not hard figuring out a story idea or setting up interviews with people. However, my issue came when I went to edit my project. One of the things that I had to work on especially taking two reporting classes this semester was setting up interviews all the way up until the last minute of deadline. When I went to edit my story, I made the mistake of taking out my SD card without ejecting it first. I have always thought that removing a memory card before ejecting it was a myth and that nothing would actually happen. However, I learned really fast that this was not a smart idea because I ended up losing an interview. I then had to contact my source and redo the interview over the phone which was not great quality. Since then I have always ejected my memory cards before removing them. You can listen to my audio package here.

“Chief Illiniwek Is Tradition” was my favorite assignment for this course. For our video package assignment, I chose to do a story on Chief Illiniwek. Although the Chief was retired in 2007 an independent organization kept the tradition going and since it is so controversial, I thought it would be a perfect and visual story idea. I also knew that the Chief in itself is just very controversial and a lot of people would be interested. I was very happy with how this package turned out. Until today, this package has gotten over 300 views on YouTube. The only thing that I wish I could have done was make a more appealing lower third graphic, however there was just not enough time. Part of not having enough time to make the lower third, was that I did not get this story Idea until very late. My full video package can be viewed here.

Ties in my closet

For our how-to assignment I decided to do how to tie a tie. As you can see in the thumbnail above, I really like to dress formal, and I have a lot of neck ties. Some of the ties that I have are from all the way back in sixth grade. I was excited to do a how-to on how to tie a tie because a lot of people do not know how to tie a tie, or only know how to do the most basic type of tie. I included a site on different styles of knots here, and you can view my how-to here. 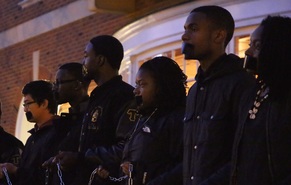 Demonstrators placed tape over their mouths and were bound to each other with a chain.

Finally, my group assignment done with Kara, Fangyi, and Camille was on race relations at the University of Illinois. This group effort was a great opportunity to work with others and get to know others in the class. At first I wasn’t so sure about doing a group assignment because past experiences have not gone so well in other classes. I even went so far as to ask Professor Collins to work alone. However, I am glad that I did not do that and got assigned with these three people. The assignment turned out to be a lot of work and would have been very hard to do entirely by myself and get all of the elements of a multimedia story into it alone. We all worked together and stayed in close contact to get the job done. In the beginning we were kind of under pressure to get our exact focus down, but in the end with the help of Professor Collins, we finished strong. You can view our multimedia blog on race relations at U of I here.

This class has been great all semester, and it has taught me to really pay attention to detail.

This site uses Akismet to reduce spam. Learn how your comment data is processed.

Off The Shelf and Online

Where we take something off the shelf for a closer look and put it online. Instructional Multimedia and Digital Publishing in Practice with Dr. Janice Marie Collins.